JSON (JavaScript Object Notation) is everywhere on the internet. It’s a “lightweight data interchange format” which has become one of the most common ways to send information from web applications to web browsers. If you’re doing any work involving calling web APIs, the chances are you are going to come across JSON data.

Python has a library to help you work with JSON: json. It’s part of the Python core, so you don’t have to install it via pip, simply import json and you’re ready to go.

Understanding how this module works will become very important for transforming your data into a useful format. Without taking a bit of time to understand the fundamentals of this module, you are going to spend a lot of time debugging errors such as:

<foo> is not JSON serializable

There are two key methods to understand:

A quick note on these methods, the plural versions (dumps/loads) keeps things in memory, the singular (dump/load) write things to a file.

This may not clairfy anything, so let’s dig deeper.

The description given in the official documentation for json.dumps is:

Why do we need to serialize?

Serialization is one particular type of encoding process, there are other ways to encode, but this is the one the json library is concerned with. Serialization converts data, potentially objects, arrays or similar, into a single string. This allows the data to be more easily stored and transmitted.

When you call a web API, data has to be transmitted to you (usually via an HTTP request). So the chances are that when that data arrives, it will be serialized (encoded). So for you to make sense of it and start manipulating it to do what you want, you will probably have to decode it. If you want later want to send the data onwards, you may need to serialize the data once again.

Now that we understand what we are trying to do and why, let’s look at some examples.

If I wanted to decode my serialized Python list, I would use the reverse process (note that there is a nasty gotcha with reversing the process when the object in question is a dictionary, read the docs):

We could apply this same logic to other data structures also:

TypeError: the JSON object must be str, not <data structure that is not a str>

This what happens when you run json.loads on something that isn’t a string, and hence is defintely not a serialized bit of data.

json.decoder.JSONDecodeError: Expecting value: <some line> <some column> <(some character)>

This error gives a look at some of the internals of the json library, where json.loads and json.dumps use the JSONDecoder and JSONEncoder classes respectively. This type of error occurs when you have passed in a string, but the string is not valid JSON (common issues include missing curly braces, missing quotation marks)

<foo> is not JSON serializable

It’s important to understand that the JSONDecoder (behind json.loads) makes the following conversions (from JSON to Python): 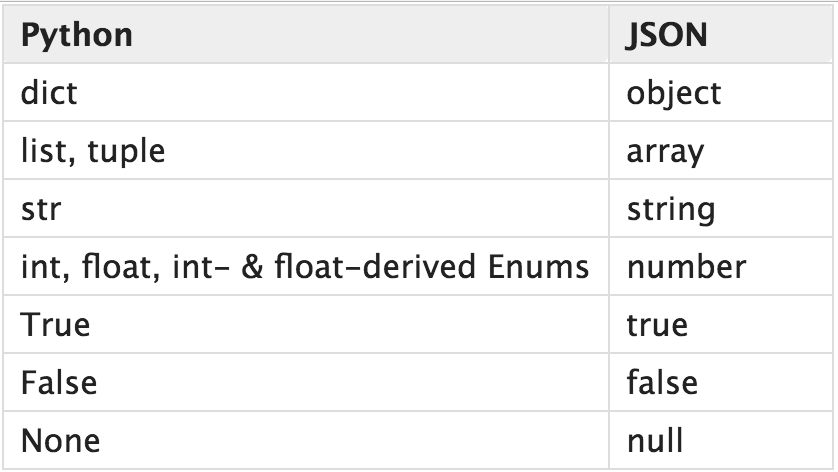 Now you are ready to deal with the majority of JSON-related code you will have to write in basic Python web applications.