The Ultimate FastAPI Tutorial Part 12 - Setting Up a React Frontend

In part 12 of the FastAPI tutorial, we'll look at setting up a React frontend

Welcome to the Ultimate FastAPI tutorial series. This post is part 12. The series is a project-based tutorial where we will build a cooking recipe API. Each post gradually adds more complex functionality, showcasing the capabilities of FastAPI, ending with a realistic, production-ready API. The series is designed to be followed in order, but if you already know FastAPI you can jump to the relevant part.

So far in this tutorial series we’ve only interacted with our API via the Open API (swagger) UI, and by serving a fairly limited Jinja2 template. If your system is all backend microservices, then this is fine. However, if you’re looking to serve a more complex frontend then you’ll probably want to leverage a modern JavaScript framework like:

Whilst each of these frameworks has their pros and cons, their typical interaction with FastAPI is quite similar.

Here is a rough architecture diagram: 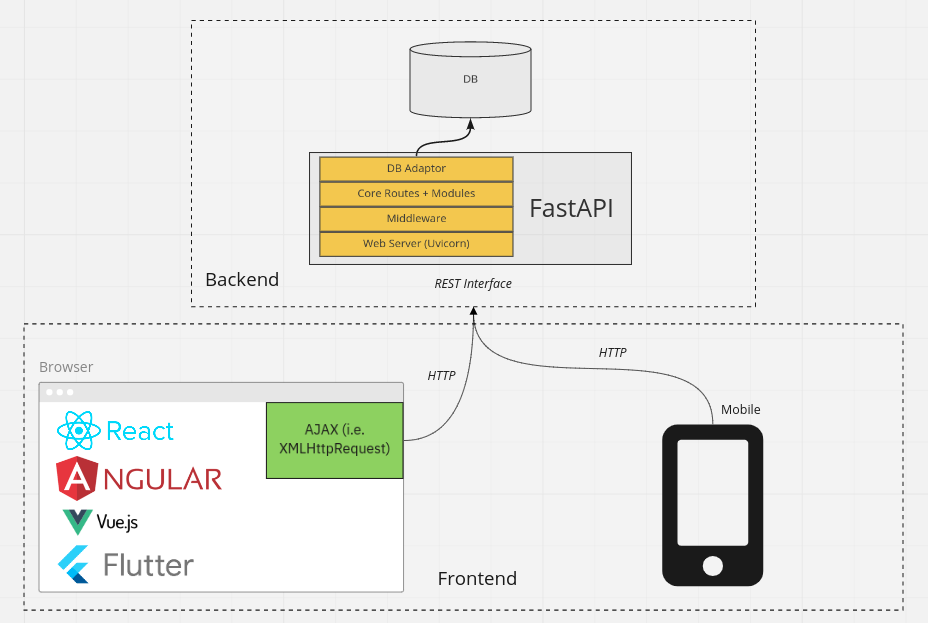 As shown in the diagram, the fundamental way the frontend frameworks interact with the backend is by making HTTP calls via AJAX. The typical interface to the backend is a REST API

A variation on this architecture would be a GraphQL approach, but that is not what we will focus on in this post.

You could implement the backend in any language (node, PHP, Java…any language that can create a web server), but since this is a FastAPI tutorial, the Python choice is made for us :)

Since React is the most popular of the modern frontend frameworks, this is the one I have chosen to use for the tutorial series. Whilst this isn’t a series on React, I will cover it in enough detail to give a meaningful example of how it would work with FastAPI - so I’m including common requirements like auth, and including multiple pages and components. My idea here is that if you combine this tutorial with other dedicated React tutorials (I recommend the getting started docs), you’ll be able to put together all the pieces you need for interaction across the full stack.

Note, we’ll look at deployment of both the front and backends later in the tutorial series.

If you’re not familiar with React then I suggest checking out the very approachable docs. The key thing to note here is that the create-react-app package we’re making use of is an officially supported tool that simplifies React apps:

Create React App is an officially supported way to create single-page React applications. It offers a modern build setup with no configuration.

Under the hood, React relies on:

Each of these usually requires configuring, and it can be a painful hurdle for those unfamiliar with the ecosystem. Create React App basically sets sensible defaults for you so you can skip all that setup. At any point you can call the eject command (which is irreversible) and then all the underlying config files are revealed so you can customize them. Given this simplification, it’s a great tool for when you are starting out, and it offers flexibility as your app grows in complexity.

Setting Up the Project Structure

You’ll notice that in part 12 of our project repo we have a new frontend directory where all React code will be. To get started, cd into this directory then install the dependencies:

Your app will start, and if you then navigate over to http://localhost:3000/ you should see this: 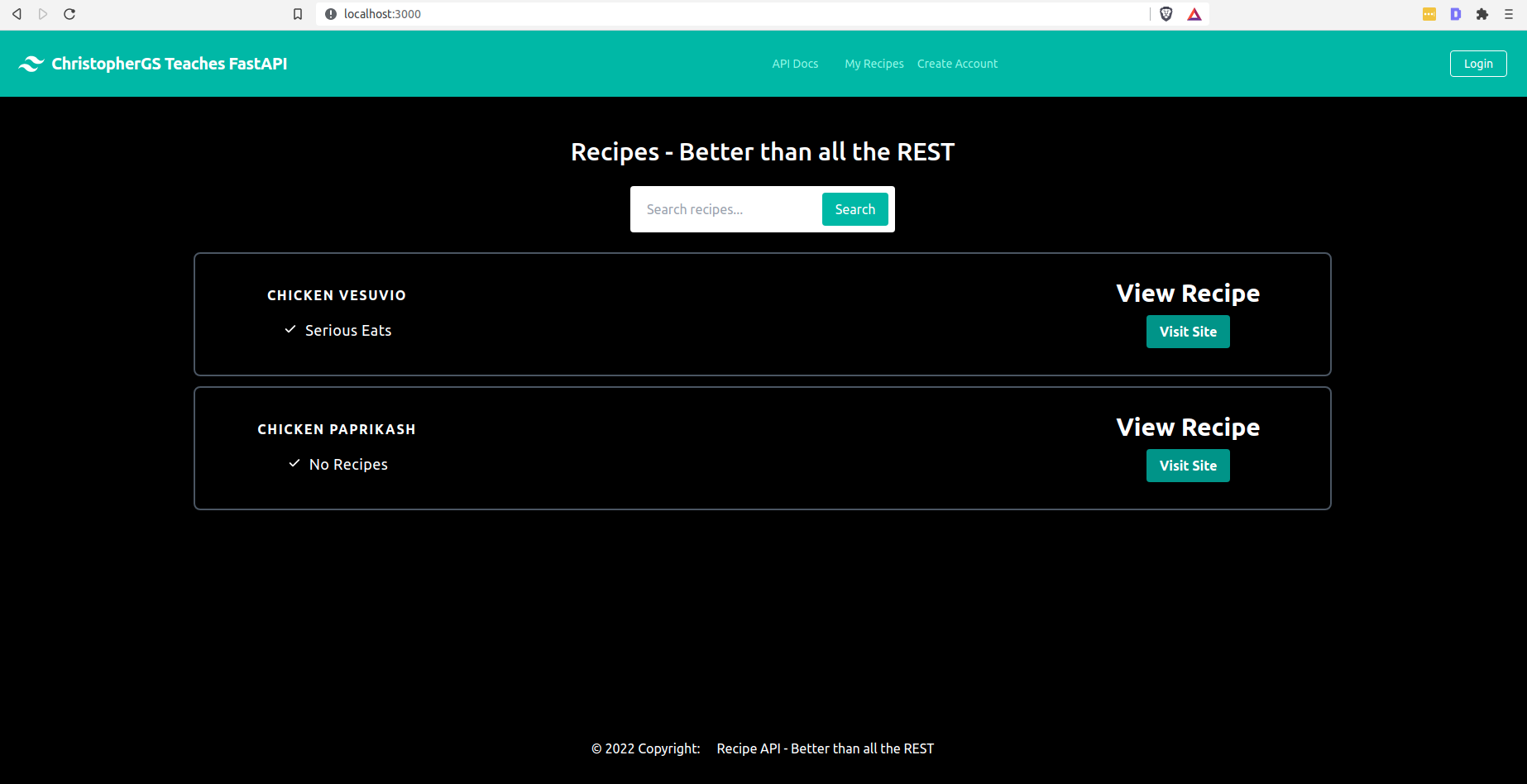 At the moment the recipes are being fetched from an externally running version of our FastAPI app (which is deployed using the method we’ll explore in the next part of this tutorial series). This API is specified in our frontend/config.js file under the REACT_APP_API_BASE_PATH setting. However, to test everything locally we’ll want to update this value to be our running backend application: http://localhost:8001. Obviously we’ll first have to start up our backend app, as we have done in the previous entries in the tutorial series.

Before we hook up the local backend, let’s inspect our frontend structure:

This is a pretty standard structure:

Sidebar: What is JSX?

You’ll notice that all of our page and component files have a .jsx extension. This is called JSX, and it is a syntax extension to JavaScript. The React docs recommend using it to describe what the UI should look like. JSX may remind you of a template language, but it comes with the full power of JavaScript.

Sidebar: What’s With All the ClassNames - Tailwind CSS

Within the .jsx files we’re styling the HTML with Tailwind CSS (this is what all the className="flex items-center justify-center type of lines are about) which has gained popularity over the past few years due to its ease of use, especially for responsive design.

Hooks were added in React 16.8. If you wrote React before this update and you’re now looking at this tutorial, you might be wondering where all the React classes are. The answer is: They’re not needed if we use hooks.

Hooks let you use more of React’s features without classes. Conceptually, React components have always been closer to functions. Hooks embrace functions, but without sacrificing the practical spirit of React

Now that we understand how our React frontend application works, let’s have it fetch data from our FastAPI backend.

In frontend/src/pages/home/index.jsx We have the following component:

Let’s break this down

OK, let’s go deeper now and look at what the client FastAPIClient getSampleRecipes method is doing: 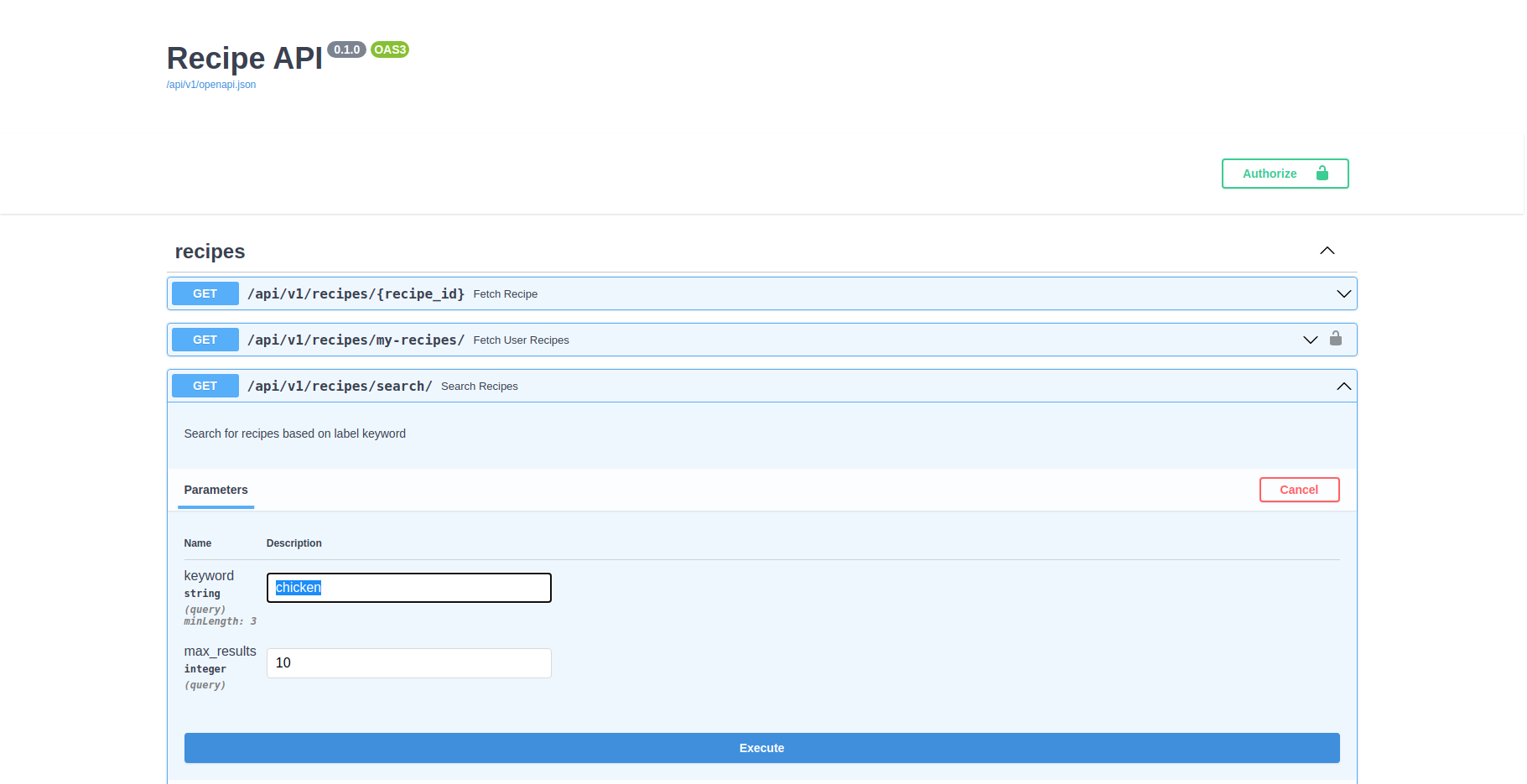 In order to see this client working, let’s start the backend:

You should now see recipe data:

And if you open up the browser dev tools and look at the network tab, you’ll see the app making requests to the backend running at http://localhost:8001:

As promised, we’re going beyond just a toy example. We’ll hook up an auth mechanism between our React frontend and our JWT-based backend auth system which we covered in part 10

We’ll start with the /frontend/src/pages/sign-up/index.jsx

We have a pretty standard React registration form, which makes use of our FormInput and Button components located:

This is pretty standard React code, but for those backend devs who might be a bit rusty (I sympathise!), here’s a quick breakdown:

OK great, next up we’ll dig down into the client:

Here we prepare all the registration form data gathered in our React component. This loginData is then set as the body of a POST request to our API /auth/signup endpoint. We return the response (which will be the JWT token). Feel free to play around with this endpoint yourself by starting up the backend, navigating to the /docs interactive UI and trying it out: 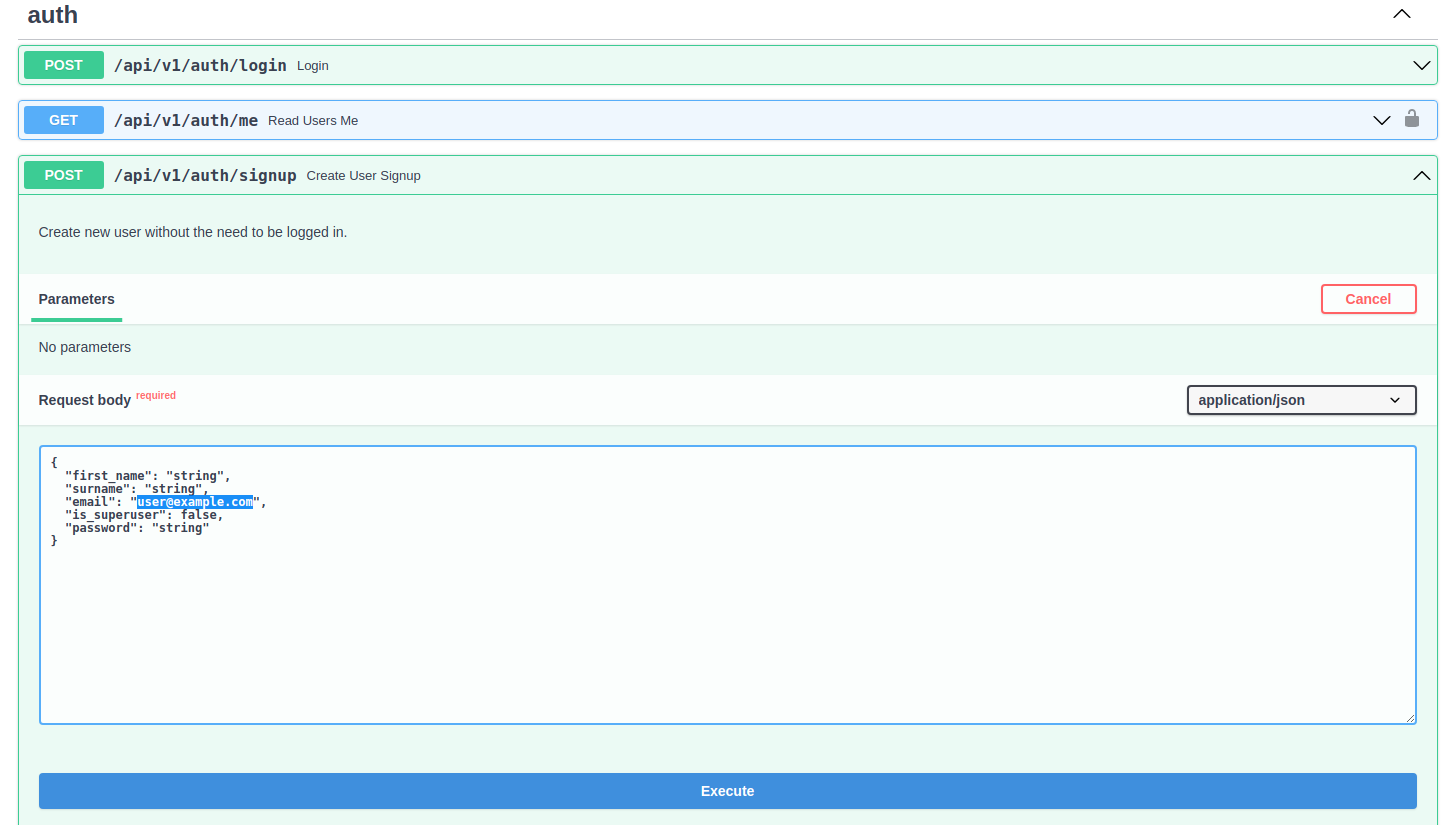 So now we have registered a user. We still need to login.

The login React page follows almost exactly the same format and logic as the registration page (obviously calling the login method on the client instead of the register method) so I won’t go over that. Where things differ is in the client:

Lots happening in this code block, let’s break it down:

Every request the React app makes to the backend API has an Authorization header inserted via the localStorageTokenInterceptor we specified earlier in the getApiClient method. Let’s look at the interceptor function, which is the final piece in our client-side auth story:

And voila, now requests to our FastAPI endpoints which require user auth are possible. In our React app, this allows us to have the concept of login-required pages. The pages/my-recipes page is an example of this. We can set component state based on the presence of a token:

And then display different HTML and/or redirect based on this state. In our example React app the “my-recipes” page is only displayed to logged in users, and attempts to create new recipes for non-logged in users will fail.

We’re also able to chain calls to get user information and then create recipes for a specific user based on the ID (recall, this is how the POST /recipes/ endpoint is structured, expecting a submitter_id as one of the POST body fields):

We’ve mostly considered the frontend additions so far, but we also need to take a moment to look at a few key updates to the API. —

CORS or “Cross-Origin Resource Sharing” refers to the situations when a frontend running in a browser has JavaScript code that communicates with a backend, and the backend is in a different “origin” than the frontend.

Quoting from the docs:

In short, this gives you control over which frontends can call your API, which is often useful. In the case of our Recipe API and React frontend, we do need to allow some origins to call our API, such as localhost (for local development) and our deployed frontend application.

We do this in two places. The first is by using the FastAPI CORS Middleware. We add this to main.py like so:

Notice how BACKEND_CORS_ORIGINS includes both localhost and our deployed frontend application (on Heroku). We’ll be looking at the Heroku deployment in the next part of the tutorial. Wherever you deploy your frontend, you’ll need to update this value to reflect it. Once the value is set correctly, you’ll be able to call your API without any CORS errors.

Phew! That was a lot of information. But now we have a truly modern frontend to interact with our FastAPI backend. Now we need to deploy everything…that’s coming up next.

Next we’ll deploy everything!

Part 13: Using Docker and Uvicorn to Deploy Our App to Heroku