In part 13 of the FastAPI tutorial, we'll look at containerizing our example application

Welcome to the Ultimate FastAPI tutorial series. This post is part 13. The series is a project-based tutorial where we will build a cooking recipe API. Each post gradually adds more complex functionality, showcasing the capabilities of FastAPI, ending with a realistic, production-ready API. The series is designed to be followed in order, but if you already know FastAPI you can jump to the relevant part.

Theory Section - Why Deploy With Containers?

Theory Section 1 - Why Deploy With Containers?

In modern web development, deploying with containers tends to be the overwhelming choice because it makes it much easier to scale web applications using container orchestration tools such as Kubernetes and AWS Elastic Container Service (ECS). Using containers also has many benefits for developers and for testing, since it ensures a consistent development environment across different machines (even if they are running completely different operating systems).

A full treatment of Docker and containerization is beyond the scope of this tutorial, but if you need a refresher I have a couple of videos that will help:

In this post we’re going to deploy our FastAPI backend as a container, and we’ll also upgrade our toy SQLite DB to postgreSQL (although if you’re indie hacking, don’t underestimate SQLite!)

We’re going to deploy our FastAPI application to Heroku, a tried and tested Platform as a Service (PaaS). A PaaS basically simplifies the running of our infrastructure, so we don’t have to worry about setting up virtual machines or configuring Nginx and TLS certificates.

Heroku supports container deployments and has a container registry where we can publish our docker images.

To run a FastAPI application in a remote server machine, you need an ASGI server program like Uvicorn

When we work locally (as we have done for much of this tutorial), Uvicorn runs in a single process on our computers. However, when deploying applications then replication of processes to take advantage of multiple cores is desirable as it means your server can handle more requests.

Why use Gunicorn with Uvicorn?

Uvicorn provides a lightweight way to run multiple worker processes, for example --workers 4, but does not provide any process monitoring.

This is why we also bring in Gunicorn, so that we can:

Therefore, we use a Gunicorn-compatible Uvicorn worker class to convert data sent by Gunicorn to the ASGI standard for FastAPI to use it.

Uvicorn includes a Gunicorn worker class allowing you to run ASGI applications, with all of Uvicorn’s performance benefits, while also giving you Gunicorn’s fully-featured process management.

Although we won’t need it for the actual deployment, for local development we’ll be making use of Docker Compose so we can easily create a postgreSQL database for our app to connect to.

Compose is a tool for defining and running multi-container Docker applications. With Compose, you use a YAML file to configure your application’s services. Then, with a single command, you create and start all the services from your configuration

If you need a refresher on compose, here’s a video I made on the tool:

Our first step is to create a Dockerfile. Now our application structure really starts to mirror the official FastAPI fullstack starter repo, which at first seems to have an excessive amount of nesting, but once you’ve got everything Dockerized starts to make a lot of sense.

A new directory layer appears to make room for our Dockerfile:

There are no other changes to key files (such as main.py).

I think the comments in the file do a good job of explaining what is going on. A few things to note:

It’s important to note that we’ve also modified run.sh with some more functionality:

Some of these adjustments are key, so let’s look at a few of the commented areas in the file:

Now let’s look at the presstart.sh bash script referenced in the run.sh script:

This ensures that when our container starts up, whichever database it is configured to connect to will have the correct tables generated. So how are we going to connect to a database? We’ll look at that now.

Until now we’ve been using SQLite as our database, which has meant our DB was just a file. Postgres is a full relational database management system (RDBMS) which means it needs its own server to run. For local development you have two main options:

To follow along (and if you want to learn, you should), you’ll need to install:

This is what is found in newly added part-13-docker-deployment/docker-compose.local.yml file:

Lots happening in this file, let’s break it down:

Let’s test it all out!

Make sure you are in the directory part-13-docker-deployment, then run:

The first time you run this command, the postgres image will be pulled from Docker Hub and the FastAPI application will be built from your local Dockerfile. This will take a few mins. Once it’s complete, when you run docker ps you should see two containers running:

Now navigate to http://localhost:8001 and you should see our interactive REST API swagger docs, where we can specify JSON POST request bodies. You can sanity check your new postgreSQL local database by creating a new user with the interactive documentation: 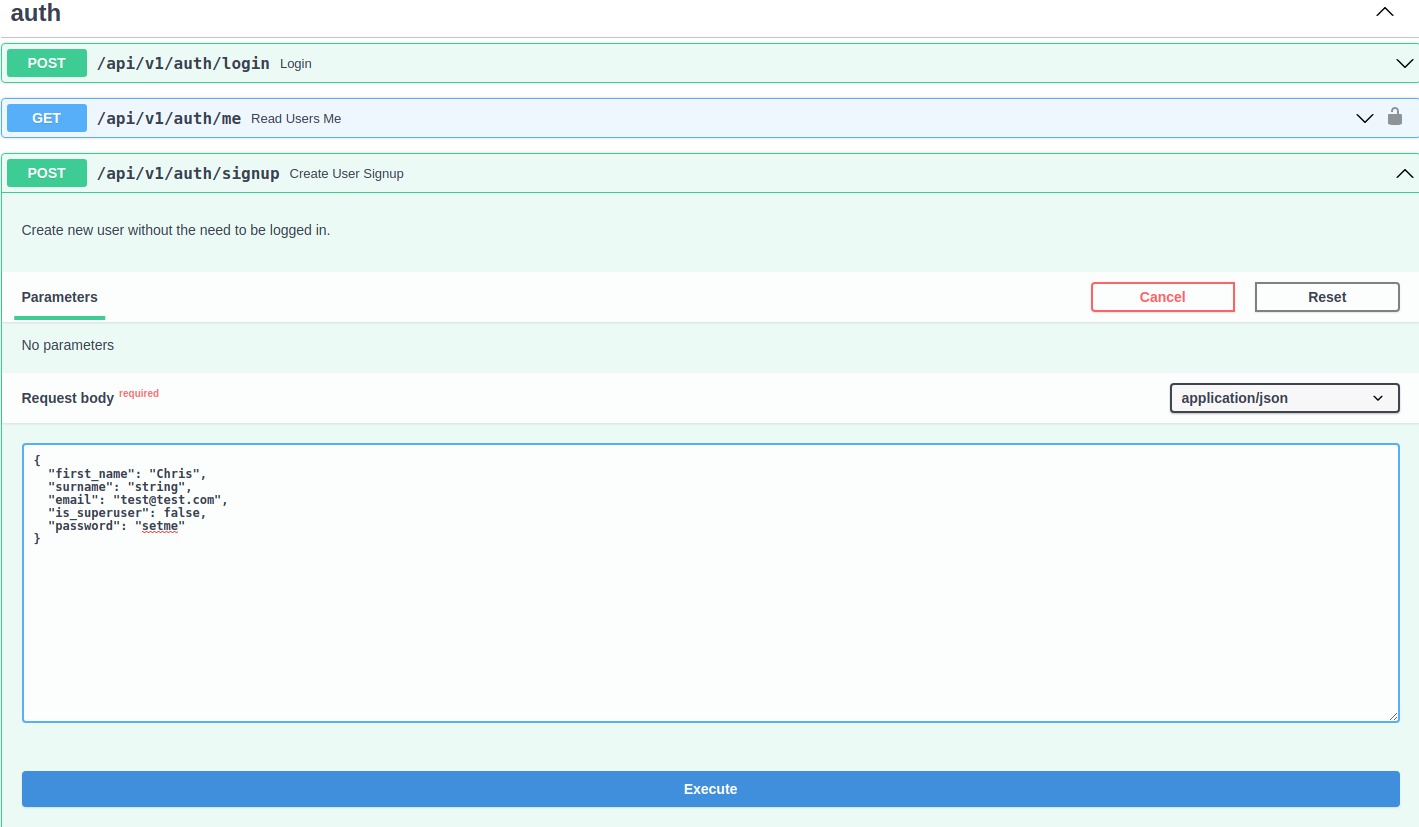 Create a user with the /api/v1/auth/signup endpoint.

You should see the postgres interactive shell: 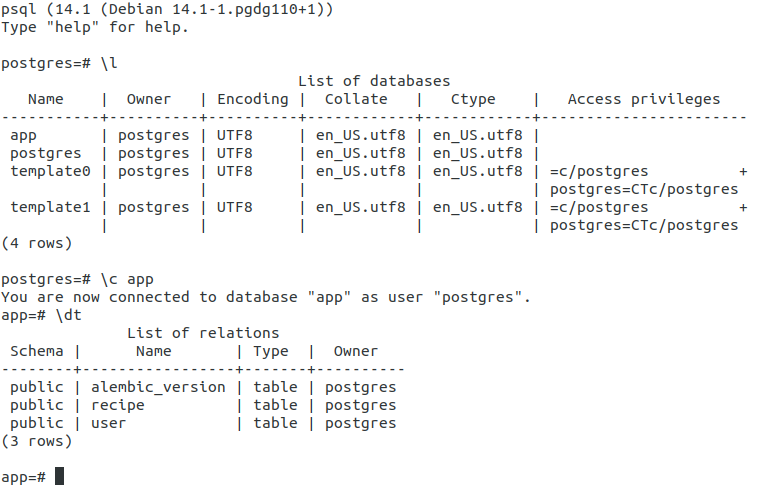 Great! Everything is working locally. Let’s crack on with the deployment.

On a virtual machine, you could install postgres and configure it to run. But this is a pretty dated way and labor intensive way to operate (although it does mean you are in full control). Modern deployments will usually connect to cloud postgres databases, such as AWS RDS or AWS Aurora. Once these are provisioned, we just need to pass the correct connection string to our SQLAlchemy database adapter.

In our case, we will use a slightly simpler (but still perfectly valid) option: we’ll use the Heroku postgres add-on. This is a managed Postgres service we can provision and connect to.

The advantage of using this for learning is that it’s very easy to setup and the Hobby Dev plan is free. Also, as a result of using this service, we only need to run one container (the FastAPI application), which is why for this particular deployment we don’t need Docker Compose, we can get away with our lone Dockerfile. Note that the docker-compose file we’ve been using for local dev can be modified for prod deployment, see here for an example.

For our deploy we will need to:

In part 13, we added a Makefile to the example project repo. This file contains the commands you need to run via the Heroku CLI.

You should see Successfully built in the terminal, as well as tagged with: registry.heroku.com/${YOUR_APP_NAME}/web:latest

This means the image has been built.

Note, if you’re on Windows Makefile commands won’t work. Either try this work-arounds or run the raw commands found in the Makefile on their own.

Now we need to push the image somewhere Heroku can access it. That place is the Heroku container registry. For the next Makefile commands to work, you’ll need to update:

You can find your app name using the Heroku CLI, with command: heroku apps. Or look in the Heroku UI:

Your HEROKU_API_KEY can be found in Account settings -> Scroll down -> Regenerate API Key:

Once you have these set, run:

Pushing the image up to the registry will take a few minutes:

Now that your image is up in the registry, the last step is to actually trigger the deployment. Under the hood, this is done via the heroku container:release command which

With our Makefile, we run:

In your terminal you should see:

To check the release occurred, you can run the heroku ps --app ${YOUR_APP_NAME} command. You should see:

Notice the time (1m) since the deploy is shown. You can also see this in the Heroku dashboard on the activity tab.

Our FastAPI app is live! Here’s the one I made (yours will have a different URL): https://fastapi-recipe-app.herokuapp.com/docs

Deploying your app from the command line is error-prone and dangerous. Best practice is to do this via a continuous integration and continuous deployment (CI/CD) process. A full overview of this topic is beyond the scope of this blog post (Here’s Martin Fowler’s article on it if you need a crash course). But the project repo deploys everything via CI/CD, so you have an example using all the above Makefile commands in the circleCI config file: https://github.com/ChristopherGS/ultimate-fastapi-tutorial/blob/main/.circleci/config.yml#L28

Our backend is deployed, so now all that remains is for us to deploy our React frontend from part 12.

We’ll want to make one config tweak to the frontend. In frontend/src/config.js

We need to install the @mars/heroku-js-runtime-env dependency so that our React environment variables can get picked up. You’ll also want to update the value of env.REACT_APP_API_BASE_PATH to be your deployed Heroku backend URL.

There are many ways to deploy a React app, and the docs are very comprehensive on this topic and your options. We’re going to use Heroku just to keep our infrastructure consistent (less complexity to manage). However, unlike the backend we’re not containerizing our frontend. This means that our deploy process with Heroku is even simpler, it’s via the git approach.

We will to need to create a new heroku app for our frontend, which you can do via the CLI or the dashboard web UI:

Make a note of your frontend app name.

In this approach, Heroku creates a git remote under the hood, and whenever new git pushes are received to this remote, Heroku triggers a new build/deploy sequence.

If you look at the Makefile, you’ll find quite an intimidating looking command to trigger this:

The reason for this complexity is the example project monorepo structure. Because each part of the tutorial is effectively a container app (which usually would be in its own repo), then this runs against what Heroku typically expects. If you’re running a monorepo with Heroku you’d usually use a monorepo build pack. In our case, however, we can use a bit of advanced git with the subtree command, to instruct git to just push the files within a particular directory (`part-13-docker-deployment/frontend). We specify the origin (which is a heroku remote) and the branch (master) and that triggers the deployment. So run:

note you need to have set your HEROKU_API_KEY environment variable, and in the Makefile you need to set HEROKU_FRONTEND_APP_NAME

You should see the following confirmation in the terminal after a few minutes of deployment:

Again, this can also be checked via CLI (`heroku ps –app ${YOUR_FRONTEND_APP}) or in the dashboard

Our frontend is now released! You can look at the CI config file from the example to repo to see this deployment automated.

Now we can visit our deployed frontend app! Here’s my example.

We’ve come a long way! In future posts I’m going to explore more advanced topics and add more features to our example app. If you have requests, please feel free to DM me on Twitter (@ChrisSamiullah)