The Ultimate FastAPI Tutorial Part 6b - Basic Deployment on Linode

In part 6b of the FastAPI tutorial, we'll look at a basic deployment on Linode with unicorn, gunicorn and nginx

Welcome to the Ultimate FastAPI tutorial series. This post is part 6b. The series is a project-based tutorial where we will build a cooking recipe API. Each post gradually adds more complex functionality, showcasing the capabilities of FastAPI, ending with a realistic, production-ready API. The series is designed to be followed in order, but if you already know FastAPI you can jump to the relevant part.

This is a serious tutorial designed to get you ready to create and deploy a production-ready API. There will be quite a few deployment posts scattered throughout the tutorial, each of which will gradually increase in complexity. We start with this basic version and ratchet complexity later, as we grow stronger and wiser. Later posts will cover:

Broadly speaking, when you’re deciding how to deploy your app you’ve got two main choices (ignoring running your own hardware, which is more niche these days):

Linode is an IaaS cloud computing provider that give you reliable Linux virtual machines in the cloud.

If you use this affiliate link you’ll get $100 credit

Use the link above.

Linode refers to each virtual machine (VM) as a “Linode”. Once you’ve logged in to the dashboard, click “Create Linode” 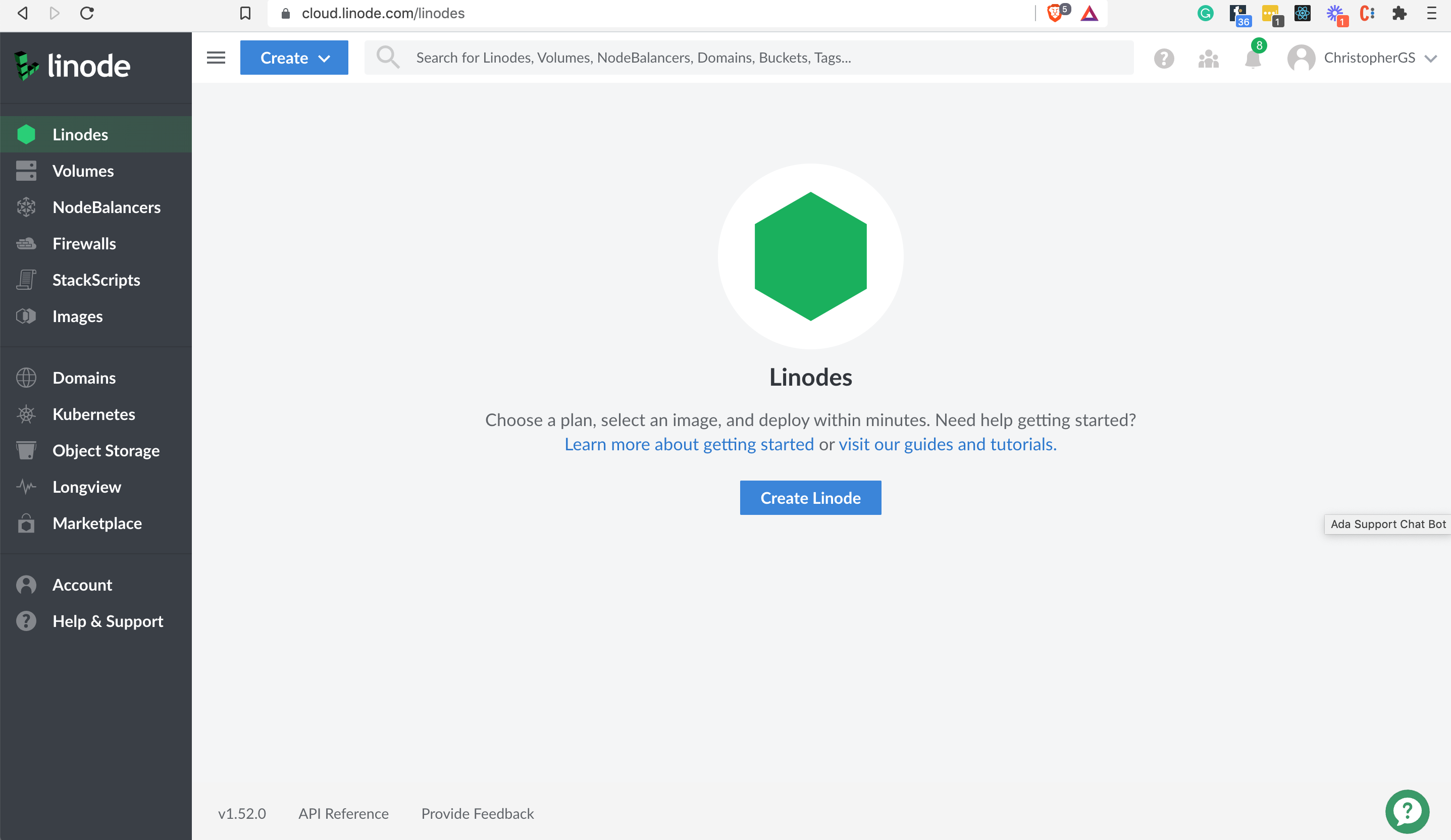 You want to go to Shared CPU -> Nanode 1 GB. This will provision the least resource-intensive VM - which is fine for learning purposes. This costs $5 per month (but you can use the affiliate link to get $100 free credit).

Deployment Step 4: SSH into your Linode

After your VM finishes provisioning (which takes a couple of minutes), on the dashboard you’ll find a section called Access, which has SSH command details:

If you’re not familiar with SSH, here’s a primer. From your terminal (or if you’re on Windows an SSH client like PuTTY) SSH into your VM. You’ll see a prompt like this:

In order to deploy our app, we need to copy the source code to the VM. The easiest way to do this is to clone the repo (note, use HTTPS clone to save the hassle of setting up git SSH keys). From your VM SSH session type:

Most of our deployment is going to be triggered using a Makefile. In order to use it, we have to install the make. Therefore enter the following commands:

Check the install worked by typing make you should see: make: *** No targets specified and no makefile found. Stop.

Great, we’re ready to proceed with the main part of the deployment.

Once this step is complete, the last step is to trigger the deployment.

Still in your SSH session, run:

You should see Application startup complete in the terminal

Head back to your Linode dashboard, and spot your Linode’s IP address

Copy and paste this into your browser and voila! You should see our familiar recipe API home screen: 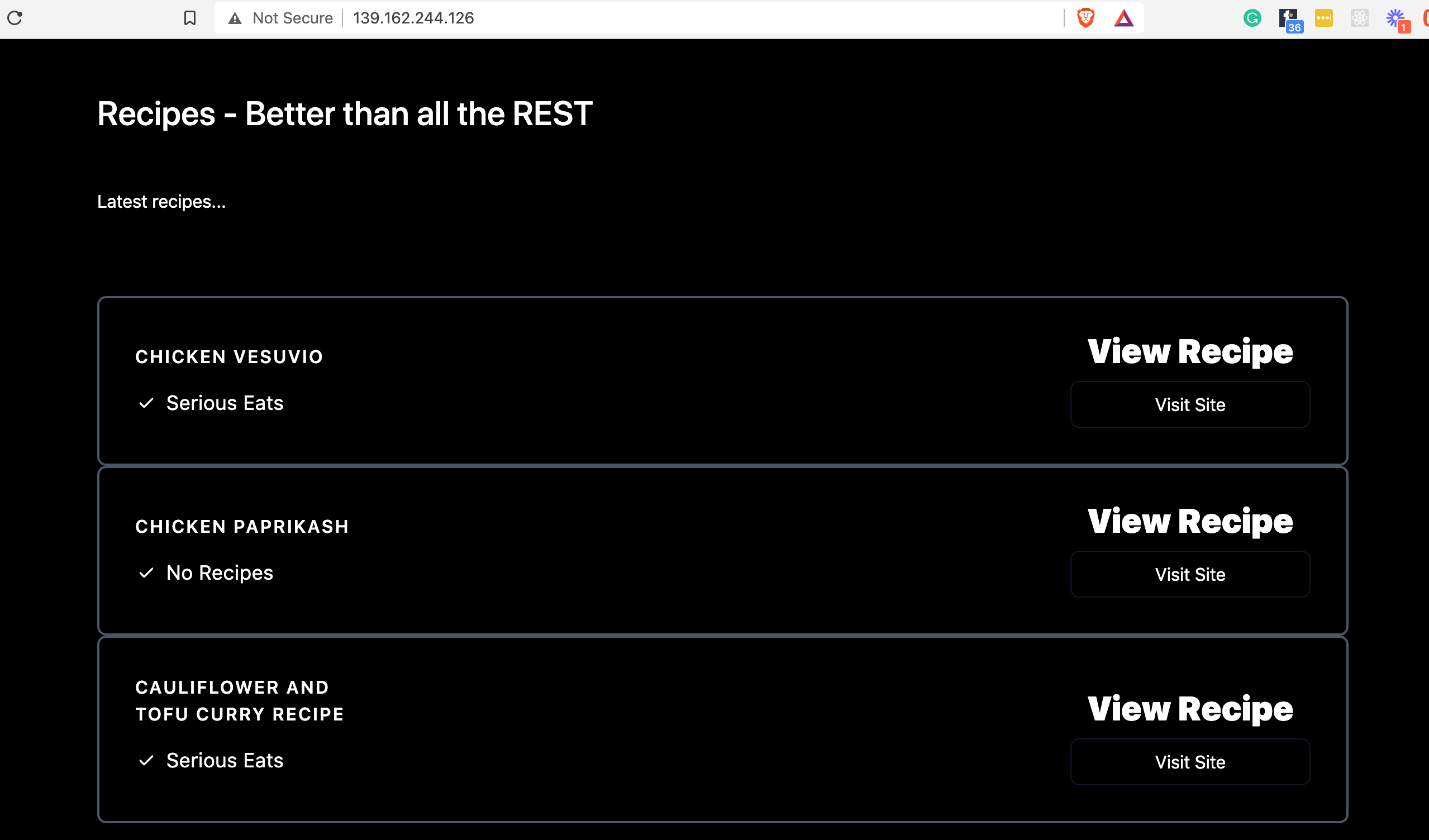 Congrats - you’ve deployed your FastAPI web application! Go ahead and visit the /docs endpoint and have a play with the JSON responses in the interactive UI. Everything should work the same as it did locally.

What’s happening here? Basically, we’ve wrapped our familiar uvicorn web server command (from our run.sh bash script) in gunicorn. Why do we need both gunicorn and uvicorn?

Here’s the relevant snippet from the docs:

But Gunicorn supports working as a process manager and allowing users to tell it which specific worker process class to use. Then Gunicorn would start one or more worker processes using that class. And Uvicorn has a Gunicorn-compatible worker class. Using that combination, Gunicorn would act as a process manager, listening on the port and the IP. And it would transmit the communication to the worker processes running the Uvicorn class. And then the Gunicorn-compatible Uvicorn worker class would be in charge of converting the data sent by Gunicorn to the ASGI standard for a FastAPI application to use it.

In short, gunicorn gives us process management capabilities that uvicorn does not possess.

We configure gunicorn with the --bind command, which is set to a UNIX domain socket (instead of a typical host and port like http://127.0.0.1:8000). This is recommended practice for production apps, as described here in the uvicorn docs.

The other key thing we’ve done is configured nginx to act as a reverse proxy. If you look at the nginx/default.conf you’ll see:

Notice the line proxy_pass where we proxy incoming requests to the uvicorn upstream, which we in turn define at the bottom of the file as unix:/tmp/uvicorn.sock;, which is what we told gunicorn to expect via the --bind configuration.

This deployment getting towards production-ready. The obvious hole in it right now is that if you close your SSH session, you’ll also shutdown the deployment (you’ll get a 502).

How We Would Improve the Deployment

There are many things about this approach which are not best practice. Chiefly, you would not perform each of these manual steps from the command line. Instead, you would configure a continuous integration (CI) pipeline to run the steps for you to reduce the chance of error and to automate the process. However, in the context of this tutorial, I think it’s useful to get a feel for how things work. In future posts, we’ll look at:

In the next part of the tutorial, we’ll cover setting up a database in FastAPI.