In part 10 of the FastAPI tutorial, we'll look at setting up JWT auth endpoints

Welcome to the Ultimate FastAPI tutorial series. This post is part 10. The series is a project-based tutorial where we will build a cooking recipe API. Each post gradually adds more complex functionality, showcasing the capabilities of FastAPI, ending with a realistic, production-ready API. The series is designed to be followed in order, but if you already know FastAPI you can jump to the relevant part.

What Do We Mean by Auth: Authentication vs. Authorization

When people talk about “auth” they are talking about:

Most of what we’re covering in this tutorial is authentication, but it lays the foundation necessary for authorization.

JSON Web Token (JWT, stupidly pronounced “jot”) is an open standard (RFC 7519) that defines a way for transmitting information –like authentication and authorization facts– between two parties: an issuer and an audience. Communication is safe because each token issued is digitally signed, so the consumer can verify if the token is authentic or has been forged. There are quite a few different ways to sign the token which are discussed in more detail here

A JSON Web Token is basically a long encoded text string. This string is consists of three smaller parts, separated by a period. These parts are:

JSON web tokens are not “secrets” (unless you choose to encrypt them) like API tokens. However, because they are signed they cannot be easily tampered with - this is their value. JWTs are designed to be passed around. In fact, here is one for our example app which you can copy and paste into jwt.io to play with: eyJhbGciOiJIUzI1NiIsInR5cCI6IkpXVCJ9.eyJ0eXBlIjoiYWNjZXNzX3Rva2VuIiwiZXhwIjoxNjI5NzMyNzY2LCJpYXQiOjE2MjkwNDE1NjYsInN1YiI6IjUifQ.rJCd2LxtEn5hJz3OASul0bhHf2GlFKfCNNk48q0pb4o

Notice the decoded section on the right consists of three parts.

It all comes down to state. The HTTP protocol is stateless, so when calling protected API endpoints our options are:

With JWTs, the client (e.g. a user’s browser) will store a copy of the JWT after logging in and then include it in subsequent request headers. On the server, this token is decoded and verified. This means there is no need for every protected endpoint request to include login credentials.

Typical JWT auth use cases include:

This tutorial series’s project, a recipe API, is a realistic scenario where we would want an auth solution.

There are alternatives to JWTs such as:

The pros and cons of these alternatives are discussed here. I am not a security expert, so do your research. This post assumes that you have decided to go down the JWT route (which is very popular). Let’s get coding!

Let’s take a look at the new additions to the app directory in part 10:

To begin, we’ve added three new endpoints to our recipe API. These are in the api/api_v1/endpoints/auth.py module. We’ll start by considering the new /signup POST endpoint where we will create new users:

If we follow the code logic, we arrive at the call to crud.user.create(db=db, obj_in=user_in). Let’s take a look at this code in app/crud/crud_user.py:

We need to consider this code alongside the updated UserCreate schema in app/schemas/user.py which now includes the password field:

Crucially, you’ll note that in the create method (note that we’re overriding the parent CRUDBase method), we convert the Pydantic model to a dictionary by calling obj_in.dict() and then remove the password entry from the dictionary via .pop(). Then to generate the hashed password we call a new method get_password_hash. Let’s look at this function next.

When a password has been “hashed” it means it has been turned into a scrambled representation of itself (more detail here). A user’s password is taken and – using a key known to the site – the hash value is derived from the combination of both the password and the key, using a set algorithm. In the recipe API, we’ll use the passlib library to help us with this functionality. From the docs:

Passlib is a password hashing library for Python 2 & 3, which provides cross-platform implementations of over 30 password hashing algorithms, as well as a framework for managing existing password hashes. It’s designed to be useful for a wide range of tasks, from verifying a hash found in /etc/shadow, to providing full-strength password hashing for multi-user application.

This library can be seen in use in the app/core/security.py module:

Here the CryptContext class from passlib is used to hash and verify user passwords.

The last step in the user creation flow is updating our database. We’ll have to make one change to the user table:

So this is our flow to create a user. Those following along from previous tutorial posts will note that I’ve tweaked the alembic migration and the app/db/init_db.py script to accommodate creating users with a password.

Notice that we use FastAPI’s OAuth2PasswordRequestForm dependency in the path operation function.

OAuth2PasswordRequestForm is a class dependency that declares a form body with:

Let’s break the endpoint logic down:

Both of the new functions in the above list (authenticate and create_access_token) are from the new app/core/auth.py module. Let’s consider this module in its entirety now. You’ll note that at this point in the tutorial series we’ve introduced another external dependency, python-jose which provides us with a variety of cryptographic backends for encrypting and signing tokens.

Quite a lot is happening here, let’s break it down:

If the user passes the authentication check, the /login endpoint returns the JWT to the client. This JWT can then be used to access restricted functionality. A basic example of this is found in the third new endpoint:

Up until now, the only dependency injection we’ve used has been for accessing the database, but we can also use it for other things, like fetching the logged-in user. We’ll explore this in more detail in the next post of the series on dependency injection.

The key code to note from the updated app/deps.py module is here:

Here the incoming JWT token is decoded (again using python-jose), with the combination of a JWT_SECRET value set in the API app/core/config.py as well as the encoding algorithm configured there (HS256). If this decoding is successful we “trust” the token, and are happy to fetch the user from the database.

For now, let’s try out the whole auth flow locally:

You should see the new endpoints: 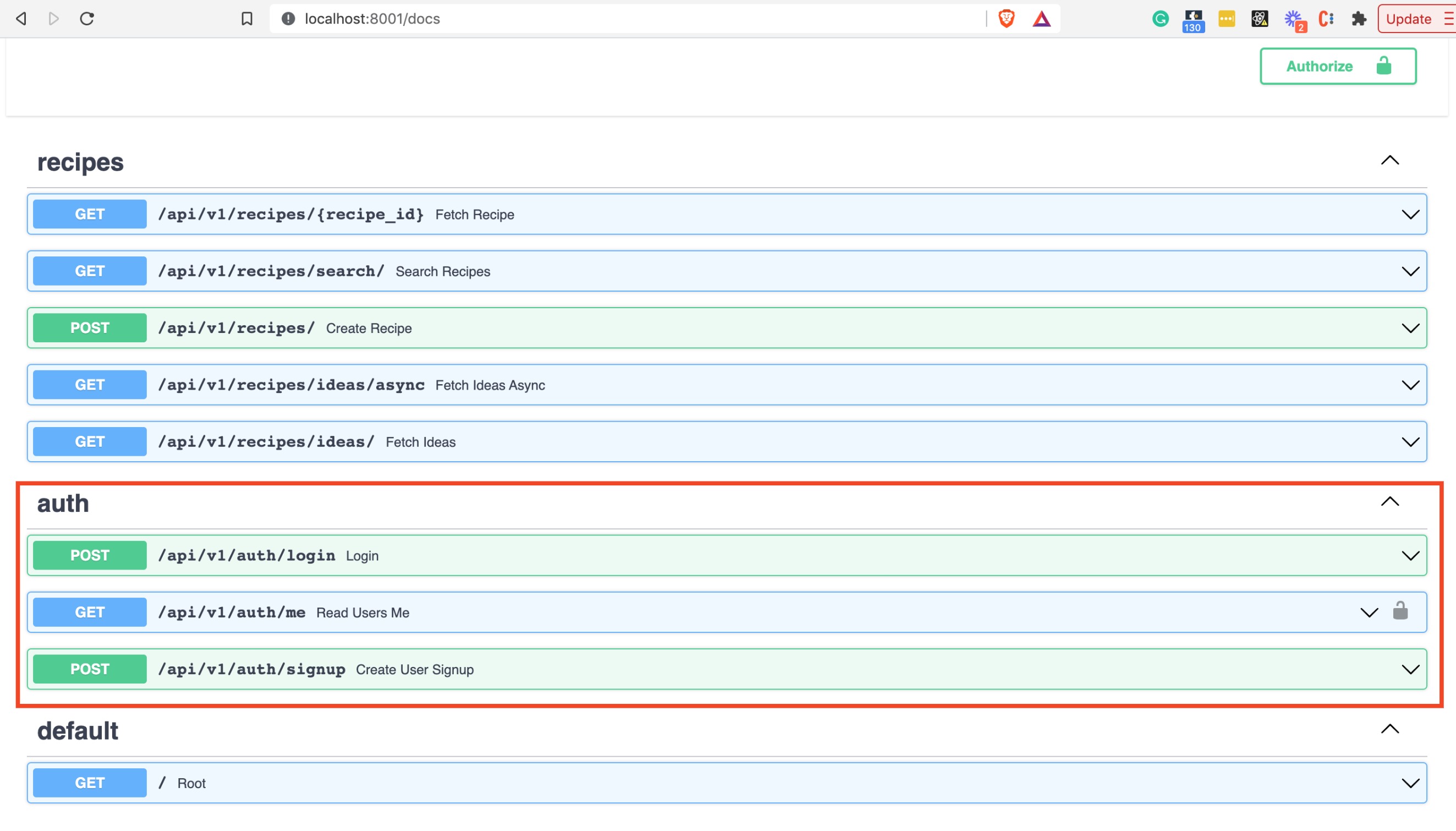 Let’s curl /api/v1/auth/me endpoint via the Try Me button:

When you hit this endpoint, you should see the response is a 401 Unauthorized: 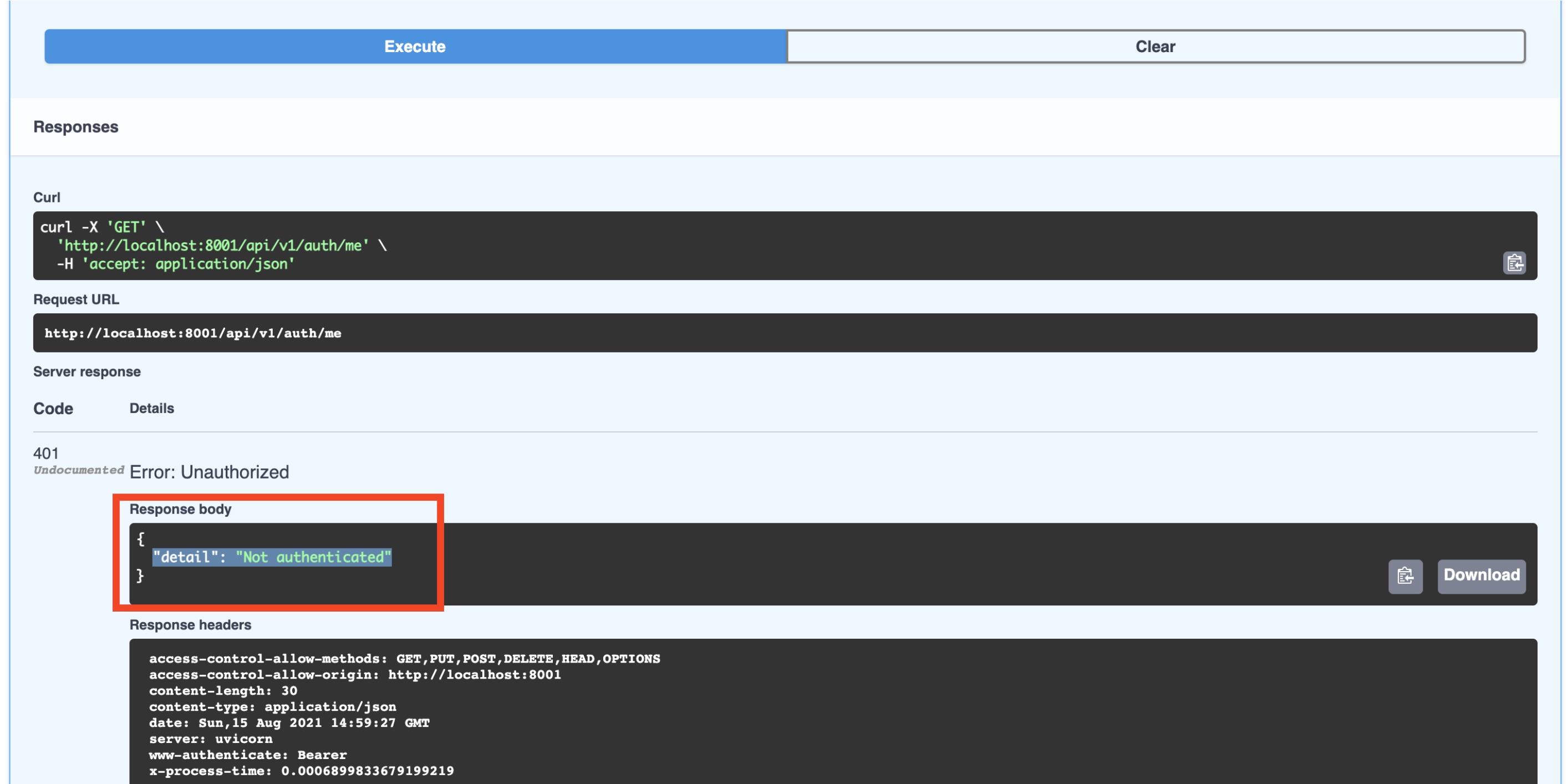 To fix this, we will first create a user via the /api/v1/auth/signup endpoint. Once again use the Try me functionality and populate the request body fields (first_name, surname, email, password) then click “execute”:

If you scroll down, you should see in the response that your user has been created:

Next, we’ll make use of a useful swagger interactive UI feature to Authorize a user. Click on the Authorize button in the top right:

Enter the credentials (note you should enter the email address in the username field) then click “Authorize”: 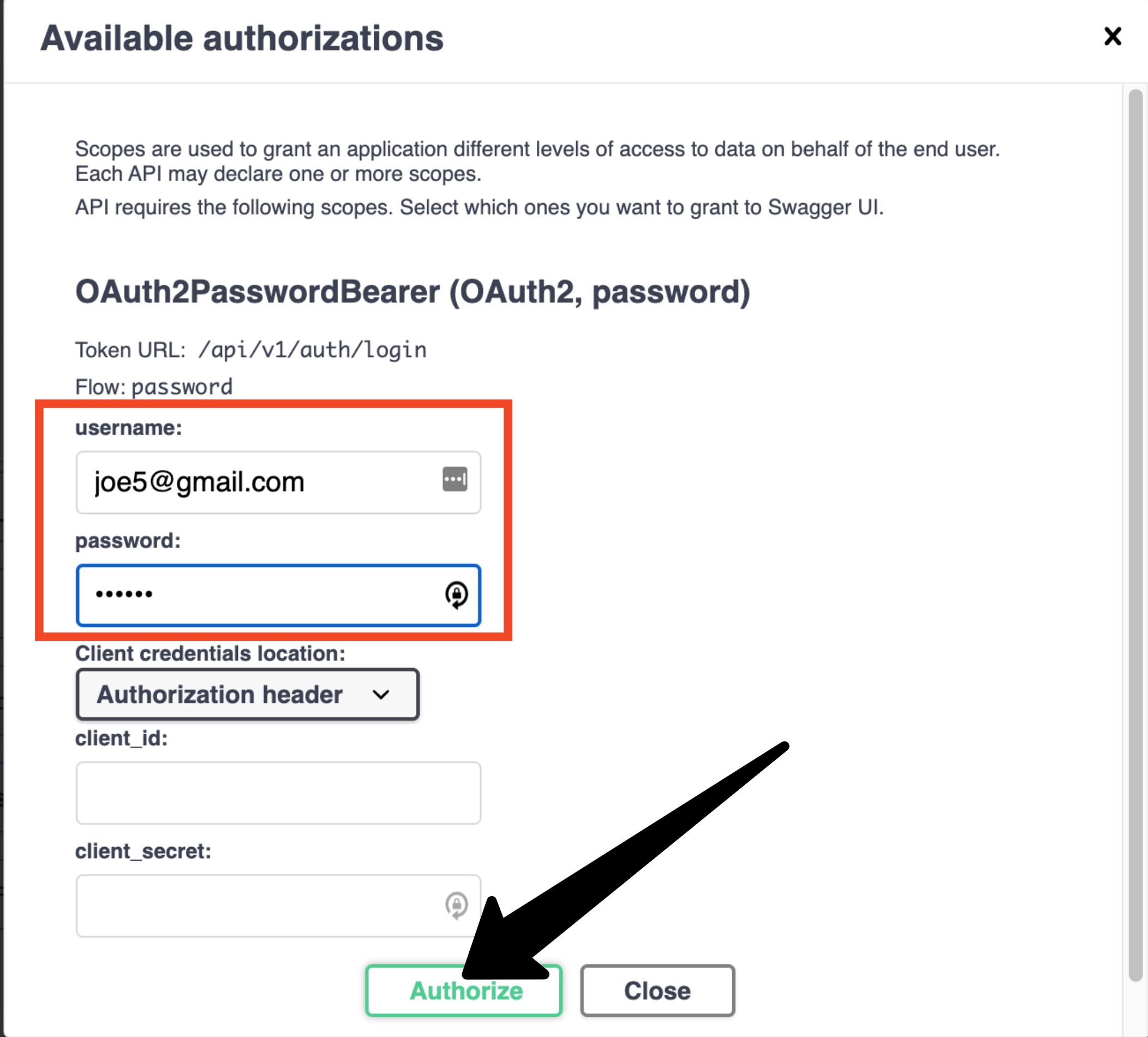 You should see that you are logged in. Now if you try the api/v1/auth/me endpoint again, you should get a 200 response with the user details in the response body:

Congrats! You now have basic auth working in your FastAPI application!

There are many more complicated features we could add like:

We’ll be looking at all of this later in the tutorial series in the advanced part.

Next we’re going to consolidate what we’ve learned in a post on dependency injection: Part 11: Dependency Injection and FastAPI Depends