In part 7 of the FastAPI tutorial, we'll look at setting up a database

Welcome to the Ultimate FastAPI tutorial series. This post is part 7. The series is a project-based tutorial where we will build a cooking recipe API. Each post gradually adds more complex functionality, showcasing the capabilities of FastAPI, ending with a realistic, production-ready API. The series is designed to be followed in order, but if you already know FastAPI you can jump to the relevant part.

Practical Section 4 - Putting it all Together in Our Endpoints

This is the first of the intermediate-level posts. We’ll cover quite a lot of ground in this post because there are a lot of parts that all work together and therefore would be more confusing if presented in isolation (because you can’t easily spin it up and run it locally without all the parts).

SQLAlchemy is one of the most widely used and highest quality Python third-party libraries. It gives application developers easy ways to work with relational databases in their Python code.

SQLAlchemy considers the database to be a relational algebra engine, not just a collection of tables. Rows can be selected from not only tables but also joins and other select statements; any of these units can be composed into a larger structure. SQLAlchemy’s expression language builds on this concept from its core.

In this tutorial, we will make use of both components, though you can adapt the approach not to use the ORM.

So far in the tutorial, we have not been able to persist data beyond a server restart since all our POST operations just updated data structures in memory. Not we will change that by bringing in a relational database. We’ll use SQLite because it requires minimal setup so it’s useful for learning. With very minor config modifications you can use the same approach for other relational database management systems (RDBMS) such as PostgreSQL or MySQL.

In the tutorial repo open up the part-7 directory. You’ll notice that there are a number of new directories compared to previous parts of the tutorial:

We’ll go through all of these additions in this post, and by the end you’ll understand how all the new modules work together to enable not just a one-time database integration, but also migrations as we update our database schemas. More on that soon.

The overall diagram of what we’re working towards looks like this:

To start off, we will look at the ORM and Data Access Layers:

For now, let’s turn our attention to the new db directory.

We want to define tables and columns from our Python classes using the ORM. In SQLAlchemy, this is enabled through a declarative mapping. The most common pattern is constructing a base class using the SQLALchemy declarative_base function, and then having all DB model classes inherit from this base class.

We create this base class in the db/base_class.py module:

In other codebases/examples you may have seen this done like so:

In our case, we’re doing the same thing but with a decorator (provided by SQLAlchemy) so that we can declare some helper methods on our Base class - like automatically generating a __tablename__.

Having done that, we are now free to define the tables we need for our API. So far we’ve worked with some toy recipe data stored in memory:

Therefore the first table we want to define is a recipe table that will store the data above. We define this table via the ORM in models/recipe.py:

As you can infer from the foreign key, we will also need to define a user table, since we want to be able to attribute the recipes to users. A user table will set us up for doing auth in later parts of the tutorial.

Our user table is defined in models/user.py, and follows a similar structure:

Great, we have defined our tables. Now what? Well, we haven’t yet told SQLAlchemy how to connect to the DB (e.g. what is the database called, how do we connect to it, what flavor of SQL is it). All this happens in the SQLALchemy Engine class.

We instantiate an engine in the db/session.py module:

Let’s break this code down:

From the SQLAlchemy Session docs:

In the most general sense, the Session establishes all conversations with the database and represents a “holding zone” for all the objects which you’ve loaded or associated with it during its lifespan.

We are making progress! Next, we will once again turn to Pydantic which we looked at in part 4 to make it very easy to get our Python code into the right shape for database operations.

For those already used to SQLAlchemy and other Python web frameworks like Django or Flask, this part will probably contain something a little different to what you might be used to. Let’s zoom in on the diagram: 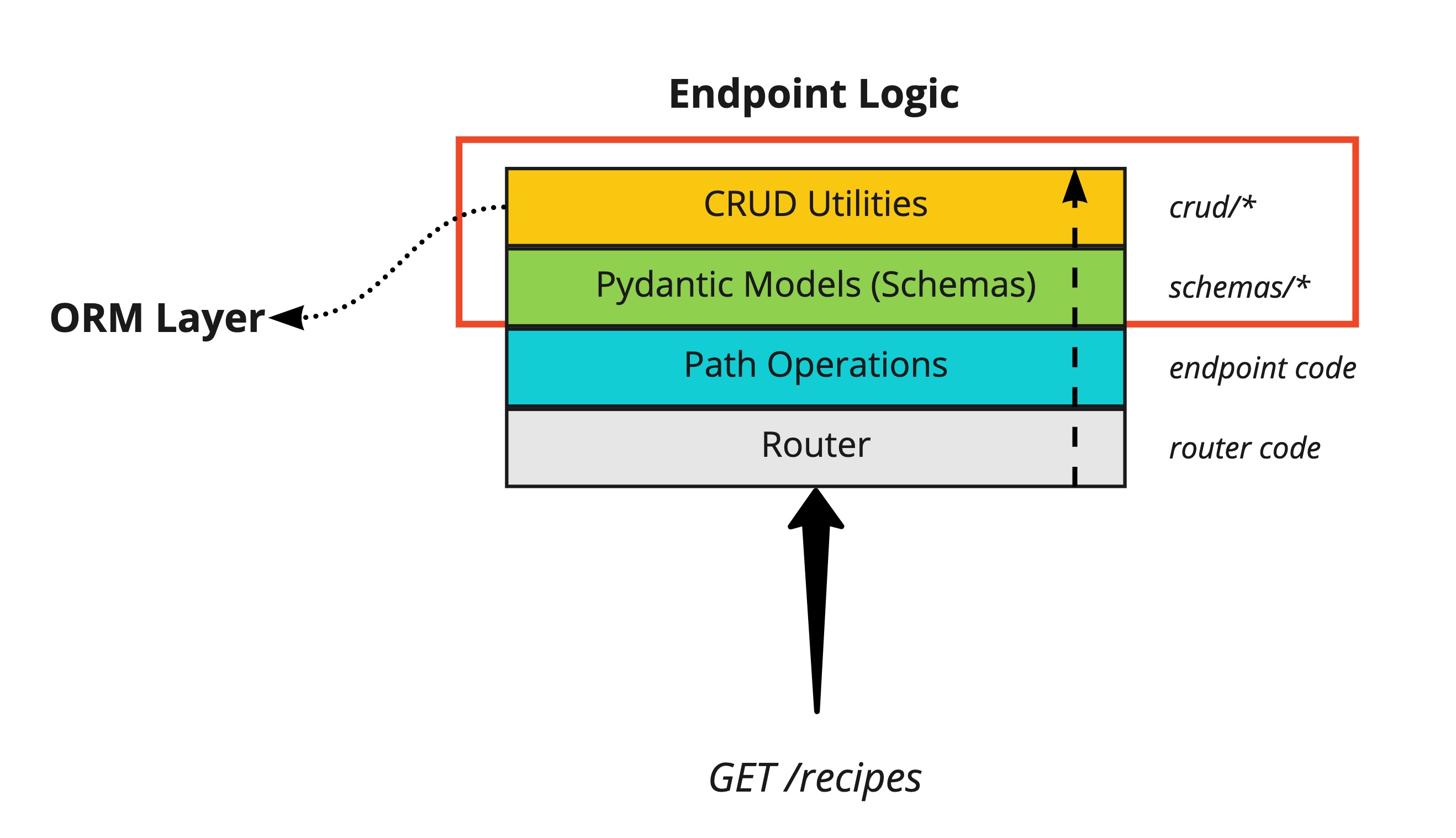 The key sequencing to understand is that as REST API requests which will require interaction with the database come in, the following occurs:

Don’t worry if this isn’t entirely clear yet, we’ll go through each step and by the end of this blog post have brought everything together.

We will create Pydantic models for reading/writing data from our various API endpoints. The terminology can get confusing because we have SQLAlchemy models which look like this:

To help distinguish the two, we tend to keep the Pydantic classes in the schemas directory.

Let’s look at the schemas/recipe.py module:

Some of these classes, like Recipe and RecipeCreate existed in previous parts of the tutorial (in the old schema.py module), others such as those classes referencing the DB, are new.

Pydantic’s orm_mode (which you can see in RecipeInDBBase) will tell the Pydantic model to read the data even if it is not a dict, but an ORM model (or any other arbitrary object with attributes). Without orm_mode, if you returned a SQLAlchemy model from your path operation, it wouldn’t include the relationship data.

Why make the distinction between a Recipe and RecipeInDB? This allows us in future to separate fields which are only relevant for the DB, or which we don’t want to return to the client (such as a password field).

As we saw in the diagram, it’s not enough to just have the Pydantic schemas. We also need some reusable functions to interact with the database. This will be our data access layer, and by FastAPI convention, these utility classes are defined in the crud directory.

These CRUD utility classes help us to do things like:

Each table gets its own CRUD class, which inherits reusable parts from a base class. Let’s examine this now in crud/base.py.

This is one of the trickier bits of code in this part of the tutorial, let’s break it down:

Now that we’ve defined the CRUDBase we can use that to define crud utilities for each table. The code for these subclasses is much simpler, with the majority of the logic inherited from the base class:

Don’t worry if this seems a bit abstract at the moment. In the last part of this post show this being used in the endpoints so can see (and run locally) the API endpoints interacting with the DB, and how the Pydantic schemas and CRUD utilities will work together. However, before we get there, we need to handle the initial creation of the DB, as well as future migrations.

The goal of this tutorial is to build a production-ready API, and you simply can’t setup a database without considering how to make changes to your tables over time. A common solution for this challenge is the alembic library, which is designed to work with SQLAlchemy.

The alembic directory contains a few files we’ll be using:

In order to trigger the alembic migrations, you run the alembic upgrade head command. When you make any change to a database table, you capture that change by running alembic revision --autogenerate -m "Some description" - this will generate a new file in the versions directory which you should always check.

For our recipe API, we’ve wrapped this migration command in the prestart.sh bash script:

Running the alembic migrations will not only apply changes to the database, but also create the tables and columns in the first place. This is why you don’t find any table creation command like Base.metadata.create_all(bind=engine) which you’ll often find in tutorials that don’t cover migrations.

You’ll notice that we also have a couple of other scripts in our prestart.sh script:

Give this a try in your cloned copy:

In the terminal, you should see migrations being applied. You should also see a new file created: part-7-database/example.db. This is the SQLite DB, check it by running:

You should see 3 tables: alembic_version, recipe, and user. Check the initial recipe data has been created with a simple SQL query: SELECT * FROM recipe;

You should see 3 recipe rows in the sqlite DB:

You can exit the SQLite3 shell with the command .exit

Great! All that remains now is to bring everything together in our API endpoints.

Practical Section 4 - Putting it all Together in Our API Endpoints

If you look at app/main.py you’ll find all the endpoint functions have been updated to take an additional db argument:

This is a first look at FastAPI’s powerful dependency injection capabilities, which for my money is one of the frameworks best features. Dependency Injection (DI) is a way for your functions and classes to declare things they need to work (in a FastAPI context, usually our endpoint functions which are called path operation functions).

We’ll be exploring dependency injection in much more detail later in the tutorial. For now, what you need to appreciate is that the FastAPI Depends class is used in our function parameters like so:

And what we pass into Depends is a function specifying the dependency. In this part of the tutorial, we’ve added these functions in the deps.py module:

OK, now understand how our DB session is being made available in our various endpoints. Let’s look at a more complex example:

The extra crud utilities took a bit more time to understand - but can you see how now we have an elegant separation of concerns - no need for any DB queries in the endpoint code, it’s all handled within our CRUD utility functions.

We see a similar pattern in the other endpoints, swapping out crud.recipe.get for crud.recipe.get_multi when we’re returning multiple recipes and crud.recipe.create when we create new recipes in the POST endpoint.

Let’s give it a try!

From the top (you can skip the prestart.sh command if you’ve already run it)

Go ahead and create a new recipe using the interactive docs try me button, you’ll need to set the submitter_id to 1 to match the initial user we created via prestart.sh: 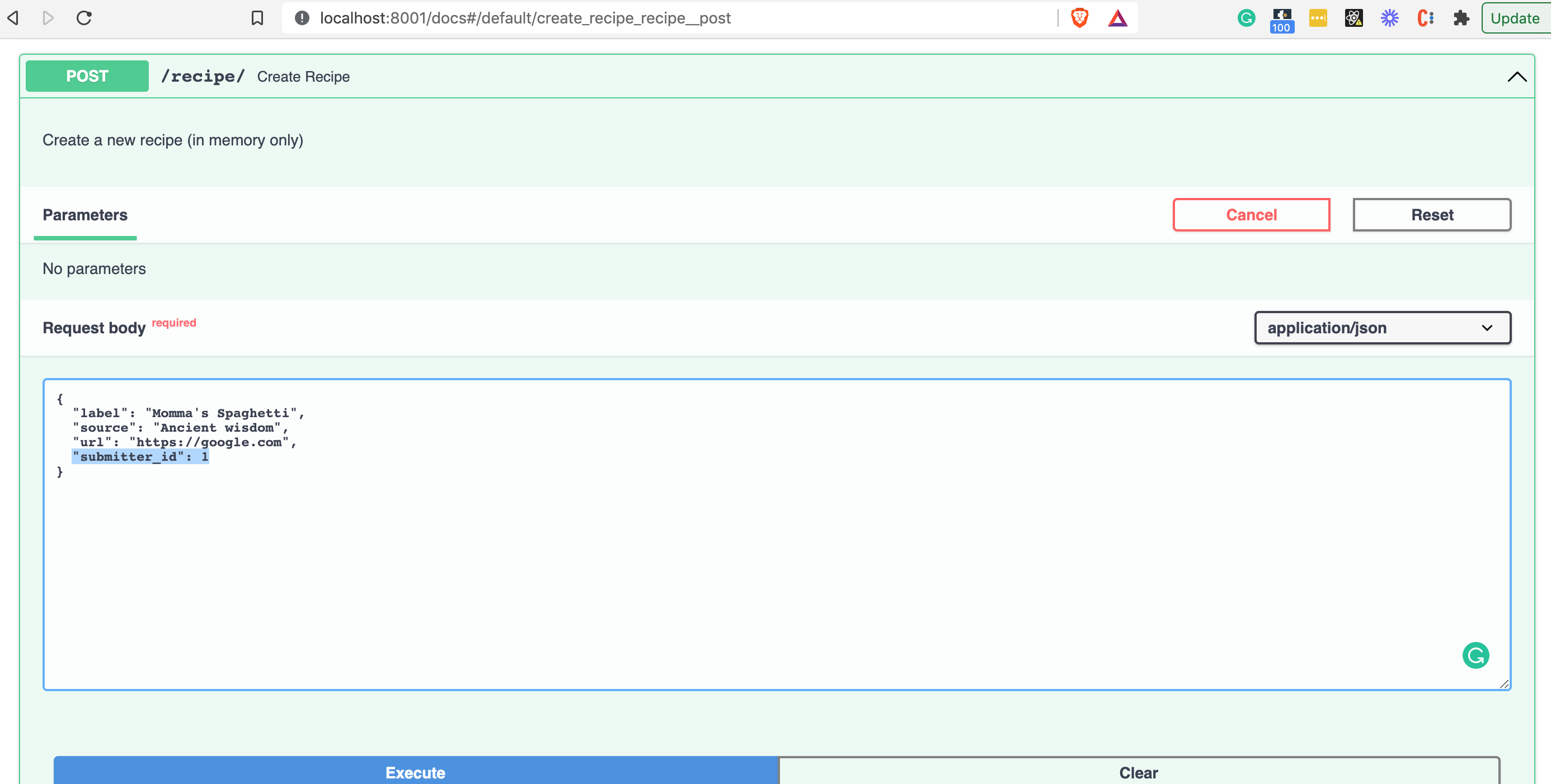 gotcha: the url field must be a valid URL with an http/https

Scroll down the responses and you should see the HTTP 201 status code JSON response body: 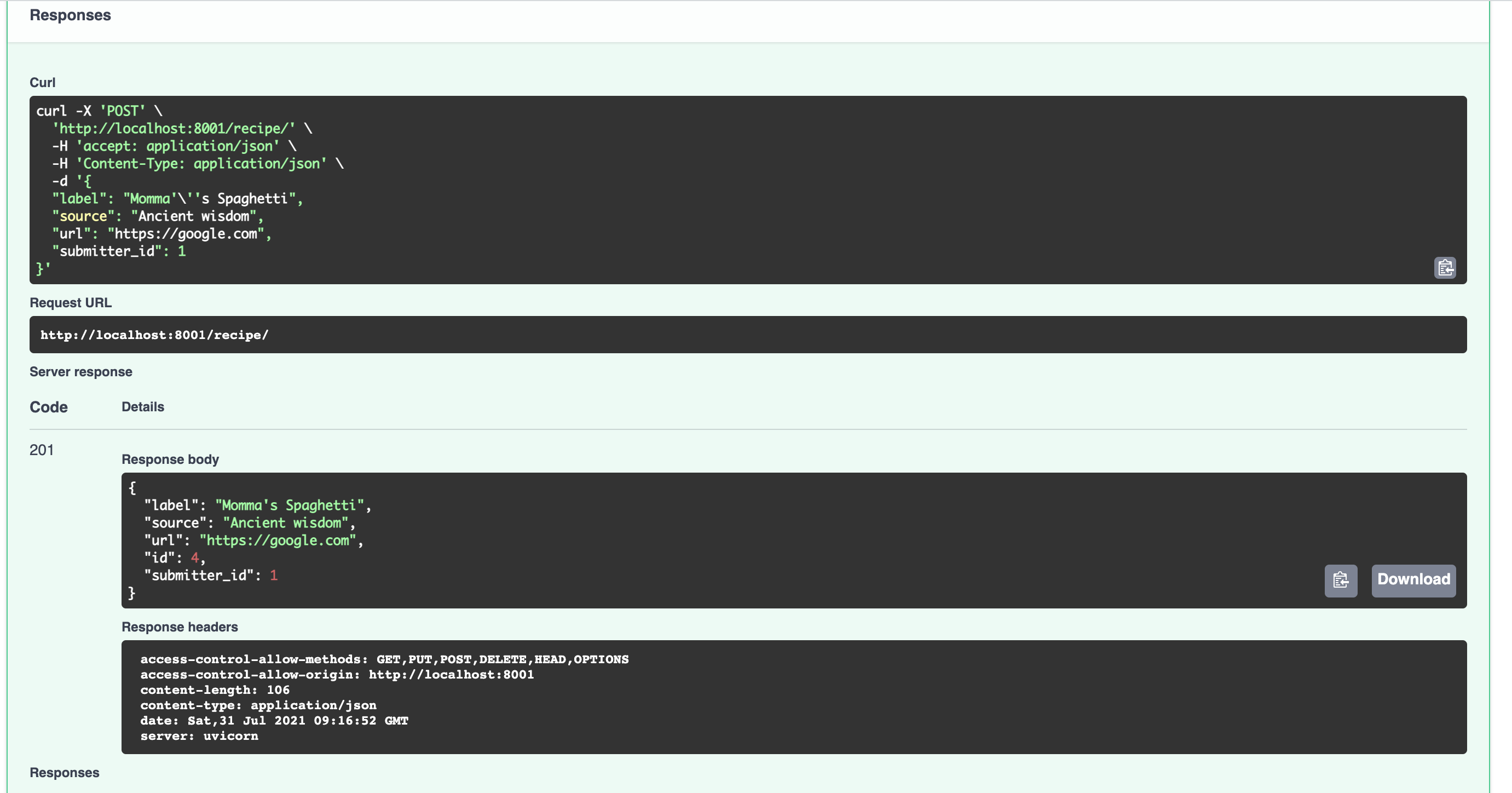 And now for the moment of truth. Stop the server (CTRL-C). Then restart it with poetry run ./run.sh

Navigate to the home page: http://localhost:8001

You should see the recipe you just created persisted in the list of recipes: 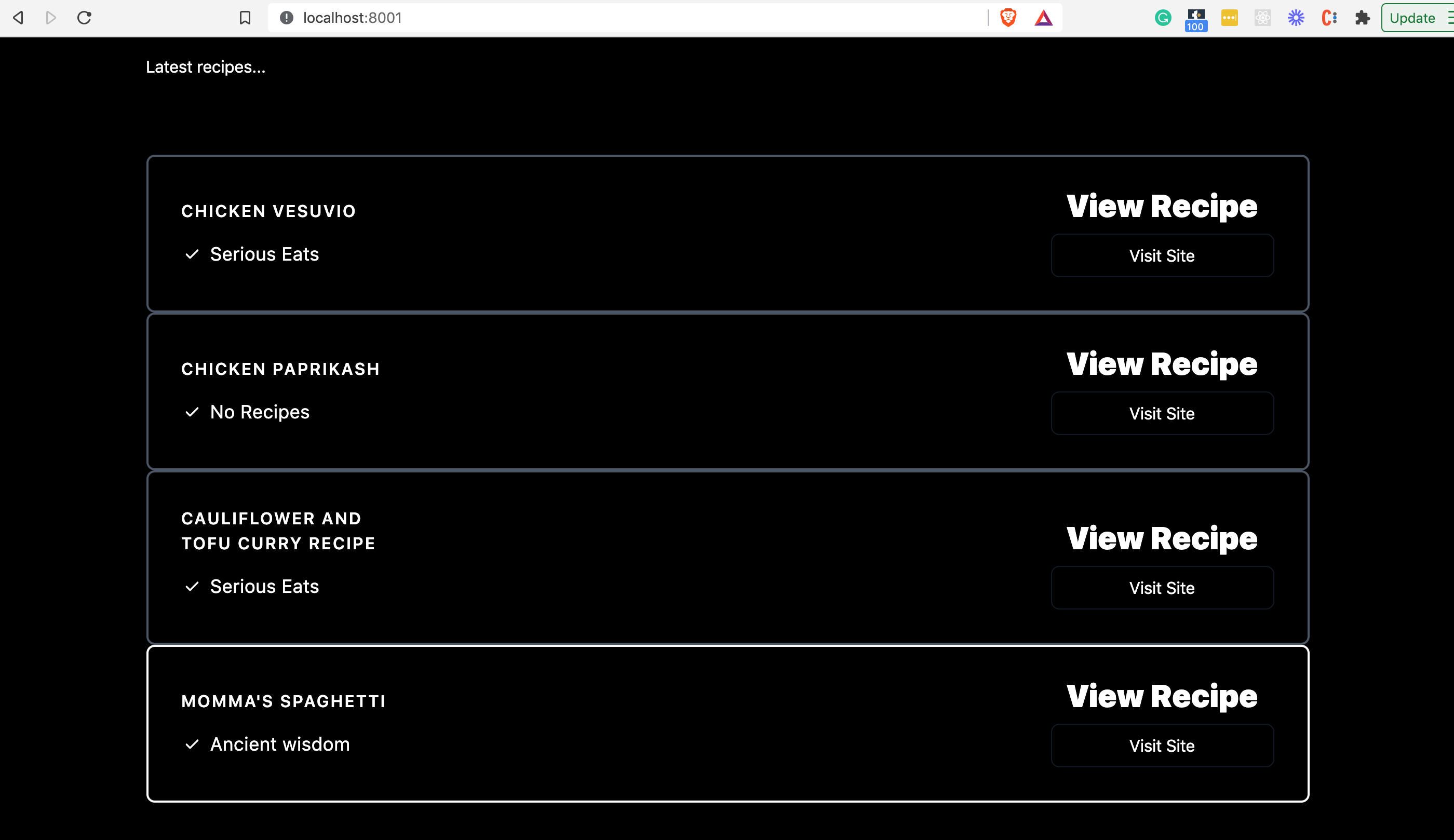 The database is now hooked up to our API!

Phew! That was a long one. In the next part of the tutorial, we’ll take stock and update our app structure to be really production-ready as well as adding proper config and API versioning. We’re well on our way now.