In part 9 of the FastAPI tutorial, we'll look at utilizing async IO to improve performance

Welcome to the Ultimate FastAPI tutorial series. This post is part 9. The series is a project-based tutorial where we will build a cooking recipe API. Each post gradually adds more complex functionality, showcasing the capabilities of FastAPI, ending with a realistic, production-ready API. The series is designed to be followed in order, but if you already know FastAPI you can jump to the relevant part.

Notes on Async IO and Third-Party Dependencies like SQLAlchemy

There are two main reasons why FastAPI is called “Fast”:

In this post, we’ll be exploring the performance element (1). If you’re comfortable with Python’s asyncio module, you can skip down to the practical part of the post. If not, let’s talk theory for a bit.

A quick bit of terminology. In programming, concurrency means:

Executing multiple tasks at the same time but not necessarily simultaneously

On the other hand, doing things in parallel means:

Parallelism means that an application splits its tasks up into smaller subtasks which can be processed in parallel, for instance on multiple CPUs at the exact same time.

This stackoverflow thread has some great further reading in the answers/comments.

For years, options for writing asynchronous code in Python were suboptimal - relying on the limited asyncore and asynchat modules (both now deprecated) or third-party libraries like gevent or Twisted. Then in Python 3.4 the asyncio library was introduced. This was one of the most significant additions to the Python language in its history, and from the initial PEP-3156 (well worth a read), there were many subsequent improvements, such as the introduction of async and await syntax in PEP-492. These changes to the language have resulted in a sudden Python ecosystem renaissance, as new tools which make use of asyncio were (and continue to be) introduced, and other libraries are updated to make use of the new capabilities. FastAPI and Starlette (which is the foundation of FastAPI) are examples of these new projects.

By leveraging Python’s new Asynchronous IO (async IO) paradigm (which exists in many other languages), FastAPI has been able to come up with very impressive benchmarks (on par with nodejs or golang):

Naturally, benchmarks should be taken with a pinch of salt, have a look at the source of these

Async IO is a great fit for IO-bound network code (which is most APIs), where you have to wait for something, for example:

Async IO is not threading, nor is it multiprocessing. In fact, async IO is a single-threaded, single-process design: it uses cooperative multitasking. For more on the trade-offs of these different approaches see this great article.

In any Python program that uses asyncio, there will be an asycio event loop

With basic examples, you’ll see this kind of code:

When you see a function defined with async def it is a special function called a coroutine. The reason why coroutines are special is that they can be paused internally, allowing the program to execute them in increments via multiple entry points for suspending and resuming execution. This is in contrast to normal functions which only have one entry point for execution.

Where you see the await keyword, this is instructing the program that this is a “suspendable point” in the coroutine. It’s a way for you to tell Python “this bit might take a while, feel free to go and do something else”.

In the above code snippet, asyncio.run is the highlevel API for executing the coroutine and also managing the asyncio event loop.

With FastAPI (and uvicorn our ASGI server), the management of the event loop is taken care of for you. This means that the main things we need to concern ourselves with are:

Let’s try it out!

Let’s take a look at the new additions to the app directory in part-9:

You should be greeted by our usual server-side rendered HTML: 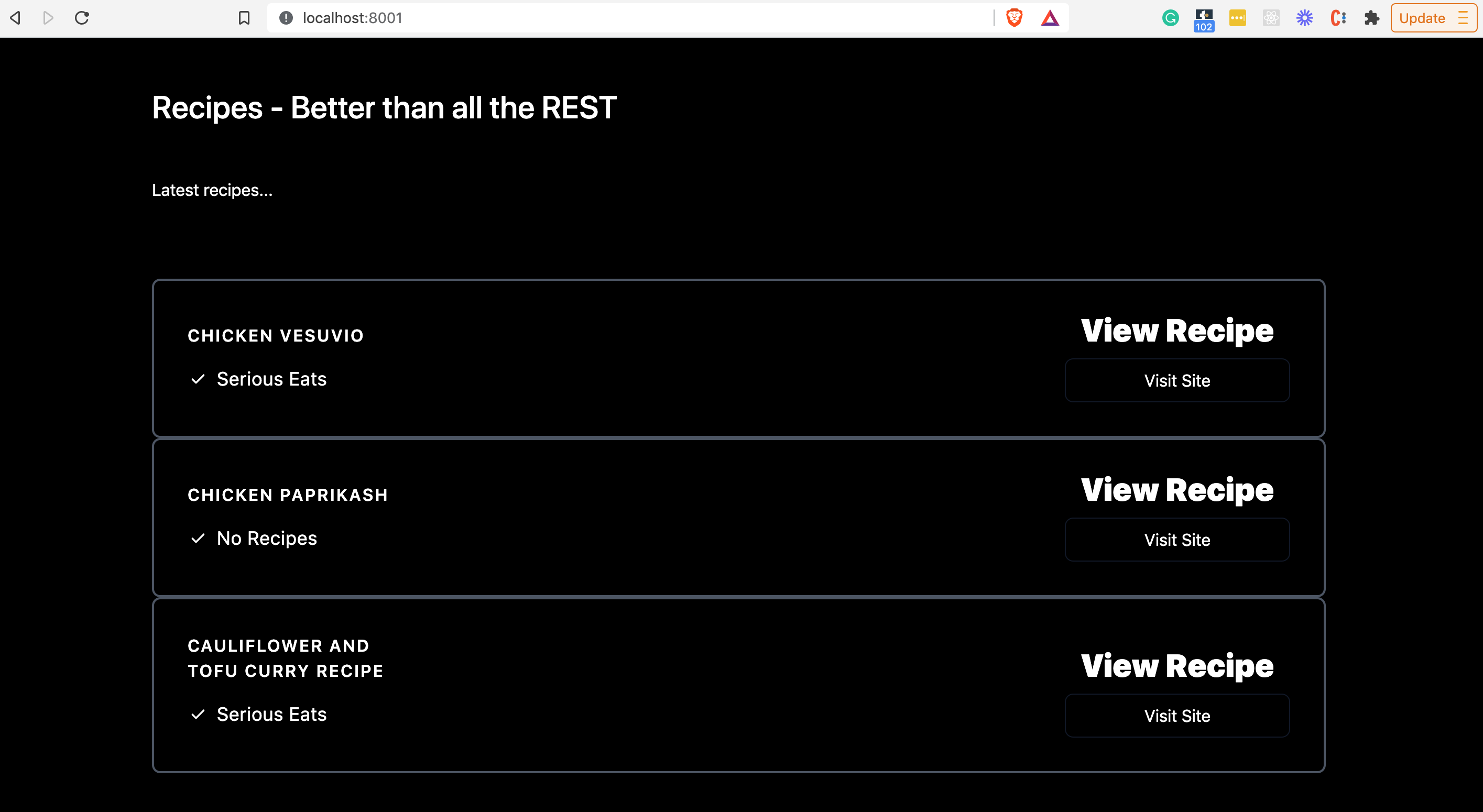 So far no change. Now navigate to the interactive swagger UI docs at http://localhost:8001/docs. You’ll notice that the recipe REST API endpoints now include:

These are two new endpoints that both do the same thing: fetch top recipes from three different subreddits and return them to the client. Obviously, this is for learning purposes, but you can imagine a scenario where our imaginary recipe API business wanted to offer API users a “recipe idea” feature.

Let’s have a look at the code for the non-async new endpoint: app/api_v1/endpoints/recipe py file

Once you get your head around the reddit API calls, this sort of code should be familiar (if it’s not, backtrack a few sections in the tutorial series).

OK, let’s break this down:

Point 5 isn’t shown explicitly in the FastAPI docs, since it’s to do with usage of asyncio rather than FastAPI. But it’s easy to miss that you need this kind of extra code to really leverage concurrency.

In order to test our new endpoints, we’ll add a small bit of middleware to track response times. Middleware is a function that works on every request before it is processed by any specific path operation. We’ll look at more Middleware later in the tutorial series. For now you just need to know that it will time our new endpoints.

Great! Now let’s open up our interactive API documentation at http://localhost:8001/docs and try out the new endpoints:

When you click the execute button, you’ll see a new addition in the response headers:

Notes on Async IO and Third Party Dependencies like SQLAlchemy

After the euphoria of the previous section, you might be tempted to think you can just plonk async and awaits for any and every IO call to get a performance speed up. One obvious place to assume this is with database queries (another classic IO operation).

Not so fast I’m afraid.

Every library that you attempt to await needs to support async IO. Many do not. SQLAlchemy only introduced this compatibility in version 1.4 and there are a lot of new things to factor in like:

We’ll be looking at this later in the tutorial series in the advanced part.

Phew! That was quite a theory-heavy one. Next, we’ll switch it up and look at auth with JSON web tokens (JWT).